Introduction of invasive pests such as these could have dramatic impacts on our natural environment. Not only in our forests, but in all ecosystems. For example, research has shown that brook and brown trout are 2-3 times more plentiful in streams that have hemlocks growing along them. 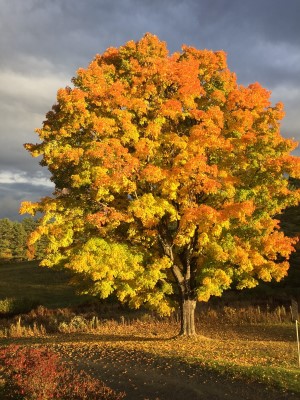 Trees provide Vermonters with valuable products like timber and maple syrup. The Asian longhorned beetle has been found to prefer maple as a host tree species. Vermont brings in at least $2.6 million annually in revenue from maple syrup production.

Trees have also been proven to aid in human health. An 18 year study in 15 states, each with at least one confirmed case of emerald ash borer, showed evidence that a loss of trees from the emerald ash borer was associated with increased mortality in humans related to cardiovascular and lower-respiratory-tract illness. Read the full article here.

Not only will invasive pests cause a loss in economic revenue, but they will also reduce the amount of services that trees provide to our communities. For example, it is estimated that the 11.9 million urban and community trees in Vermont provide an annual value of $68 billion from services such as filtering air, capturing rainwater, cooling our homes, and increasing our property values.

These insects will also cause direct expenditure of money in order to deal with the results of their presence. These costs will largely be borne by homeowners and municipal governments. Read more about pest planning and preparedness.

Non-native, invasive terrestrial plants are one of the greatest threats to the health of  Northeastern forests. They negatively impact the environment, are costly to manage, and can be harmful to human health.

Increasingly, public and private landowners struggle to reduce the impact that invasive plants, shrubs, vines, and trees have on forest regeneration, forest structure, ecosystem function, recreation, wildlife habitat. They are also concerned with the lost revenue in these altered natural communities, as well as the lost natural heritage.

However, many Vermont forests are still relatively invasive-free, so we may stand a chance in maintaining the structure and function of the state's woodlands if - and only if - we take the issue seriously. Landowners and land managers must do everything in their power to prevent the spread of invasive species, including recognizing and removing new infestations early.