Experts are expecting that white pine needle damage in Vermont this year may be worse than previous years. Vermont may be the only northern New England state to see such an increase.

The current round of white pine needle damage seemed to have started in 2005. Widespread symptoms have been reported throughout the region since 2010 and seem to be worsening. The most visible symptoms are the needles turning yellow and then brown, before dropping off prematurely. On some trees, this affects only a few branches, while on others most of the crown is involved. The new season’s needles elongate and appear healthy. But, with past year needles falling early, the canopy becomes very thin and the tree is at risk of declining.

Vermont and other state forestry agencies have been cooperating with the USFS and local universities to study this white pine needle damage. The exact cause is not completely understood. Samples have been collected and study trees have been evaluated annually.  USFS researchers have found several fungi are involved.  Four fungal pathogens are most frequently observed: Lecanosticta acicola, Lophophacidium dooksii, Bifusella linearis, and Septorioides strobe. In some instances, more than one type of fungus was found on an infested tree. These fungi thrive when there is abundant precipitation, especially in May, June and July. The rain promotes the production and dispersal of fungal spores, which land on the newly emerging pine shoots. These new shoots don’t show symptoms until the following year when they cause discoloration and early shedding.

Drought may play a role in the way white pine needle damage manifests itself this year. While Vermont did suffer from some drought in the last two years there were enough rainstorms in the critical May to July period that experts think there will still be a problem. Other parts of New England experienced more consistent drought and are expected to have lower levels of impact on pine foliage. The graph below was produced by a cooperative UNH/USFS project shows the results from a  model that is being tested to predict pine defoliation levels. The predicted levels from this experimental model for 2017 as compared to 2016, show only Vermont increasing. 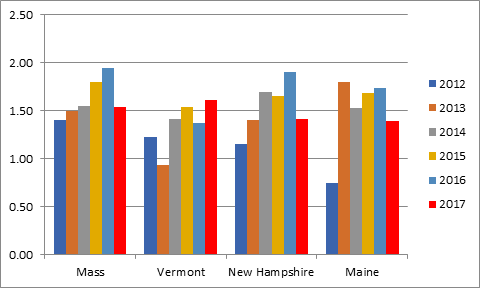 The consequences of several years of infection and defoliation are not known. A slowing of growth has been observed. Tree mortality has not been commonly observed. Generally, the uppermost branches of trees are not affected; they dry out more quickly and so, are less susceptible to infestation. With the top surviving the tree can often persist as well. Severe stress on pines may attract pine bark beetles or other secondary pests. When multiple stressors affect a tree, mortality is more likely.

There are no practical control measures for forest trees. Owners of landscape trees should help reduce other stresses on their pines. Careful thinning and pruning of ornamentals to increase air circulation and enhance drying may help to reduce fungal reproduction. Avoid pruning in wet conditions when spores are present. Consult a professional about using a fungicide.

The Vermont Department of Forests, Parks and Recreation will continue to monitor trees and send samples in the cooperative effort to understand white pine needle damage.