In mid-summer, Vermont starts to see a wave of yellow flowers bloom along roads, fields, meadows, and trails. This plant is called Wild Parsnip (Pastinaca sativa) and is similar in appearance to Queen Ann’s Lace (Daucus carota). Wild Parsnip is a member of the carrot family (Apiaceae), and is currently considered taxonomically indistinct from the common garden parsnip.

The history of this species’ introduction to North America is not clear, though some herbarium samples are available from the mid 1800’s. It is likely, that Wild Parsnip is a garden escape gone wild, spreading to almost all 50 US states, and all Canadian provinces. Exposure to this plant can be hazardous, because when the plant tissue is broken or crushed, and sap that comes in contact with skin is exposed to light, it causes a chemical burn (phytophotodermatitis). The VT Department of Health has more information on the health impacts of Wild Parsnip. In Vermont this species is listed on Vermont’s unofficial invasive plant “watchlist” because of concerns regarding its toxicity and distribution.

Wild Parsnip can reach heights well over 5’, has grooved stems, and alternately arranged compound leaves made up of 5-15 leaflets. Most notable when it flowers, Wild Parsnip has a two-stage life cycle. In the first stage, it grows up from seed, and leafs out in its rosette (circular arrangement of leaves) form for one or more years to gather energy stores in its tap root. 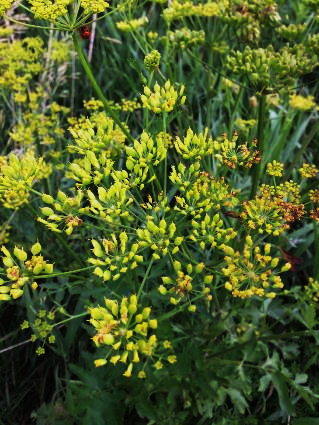 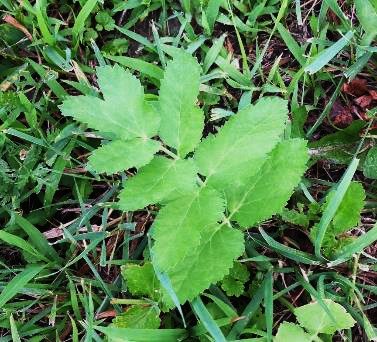 When conditions are favorable, it will enter the second stage of its life cycle, sending up a tall bolt and flowering. After it flowers and sets seed, the individual plant will die (monocarpic perennial). Seeds can remain viable in the soil for up to 4 years.

There is a similar looking yellow flowered native species— Golden Alexander (Zizia aurea), but it is more diminutive, and flowers earlier in the season.

To learn more about Wild Parsnip and options for control, check out www.VTinvasives.org and these additional resources: