As the name implies, zebra mussels have a striped pattern on their shells that differentiate them from most other shellfish, although color patterns can vary to the point of having only a dark or light colored shell with no stripes. They can be differentiated from quagga mussels (another exotic invader not yet found in Vermont) by placing a specimen on a flat surface. Zebra mussels are stable on their flattened underside while quagga mussels will fall over, as they lack a flat underside. Also, zebra mussels are typically more angular in shape, whereas quagga mussels exhibit more of a "D" shape.

Dreissenid mussels (which includes zebra and quagga mussels) are generally small, and will not exceed 5 cm in length. Dreissenid mussels are the only genus of freshwater mussels that utilize byssal threads, which allows them to attach to objects, which may include rocks, aquatic plants, dock pilings, other shellfish, and any other hard or semi-hard underwater surface. If you encounter small shellfish attached to any surface in a freshwater system, then you've found zebra or quagga mussels.

Both zebra and quagga mussels are native to the Black and Caspian Seas of Eastern Europe and the Middle East.

Dreissenid mussels attach to any stable substrate in the water column or on the bottom, which can include natural and artificial surfaces and native crustaceans and bivalves. The optimal temperature range for both species appears to be between 17-25 degrees C, but they are able to survive in a wide range of temperatures, from 3-30 degrees C. While unable to persist in completely anoxic conditions, they can survive in low oxygen conditions for short periods of time. Both zebra and quagga mussels can also tolerate low levels of salinity, but are unable to survive in saltwater environments.

Dreissenid mussels are dioecious, with fertilization occuring in the water column. When water temperatures are suitable (roughly 14-16 degrees C), females release eggs into the water column, which are fertilized by sperm released by males. After fertilization, the larvae (veligers) are free-swimming for up to a month. During this time, veligers are carried through currents and other natural movements of water. Since they are free-floating in the water at this stage, they can be easily transported to novel waterbodies in small amounts of water. Their juvenile stage begins when larvae settle to the substrate and use a "foot" for movement until a suitable surface is found. They then attach themselves using an anchor-like substance called byssal threads, where they typically stay throughout their lifetime.

Once established, zebra and quagga mussel infestations are nearly impossible to eradicate. Many control options have been and are still being tried, but successful examples are limited. Complete draining of systems may succeed in killing off adult mussels, but any surviving larvae can quickly re-establish the population. Molluscides and other chemical and biological pesticides have demonstrated promise, but eliminating established populations is difficult. Typically, management efforts for zebra and quagga mussels are focused on preventing their spread to new waterbodies.

Zebra mussels were confirmed in Lake Champlain in 1993 and are now found throughout the lake. They were also confirmed in Lake Bomoseen (Rutland Co.) in 1999. To date, those are the only Vermont waterbodies that support a confirmed Dreissenid mussel infestation.

Dreissenid mussels are now found through much of the U.S. 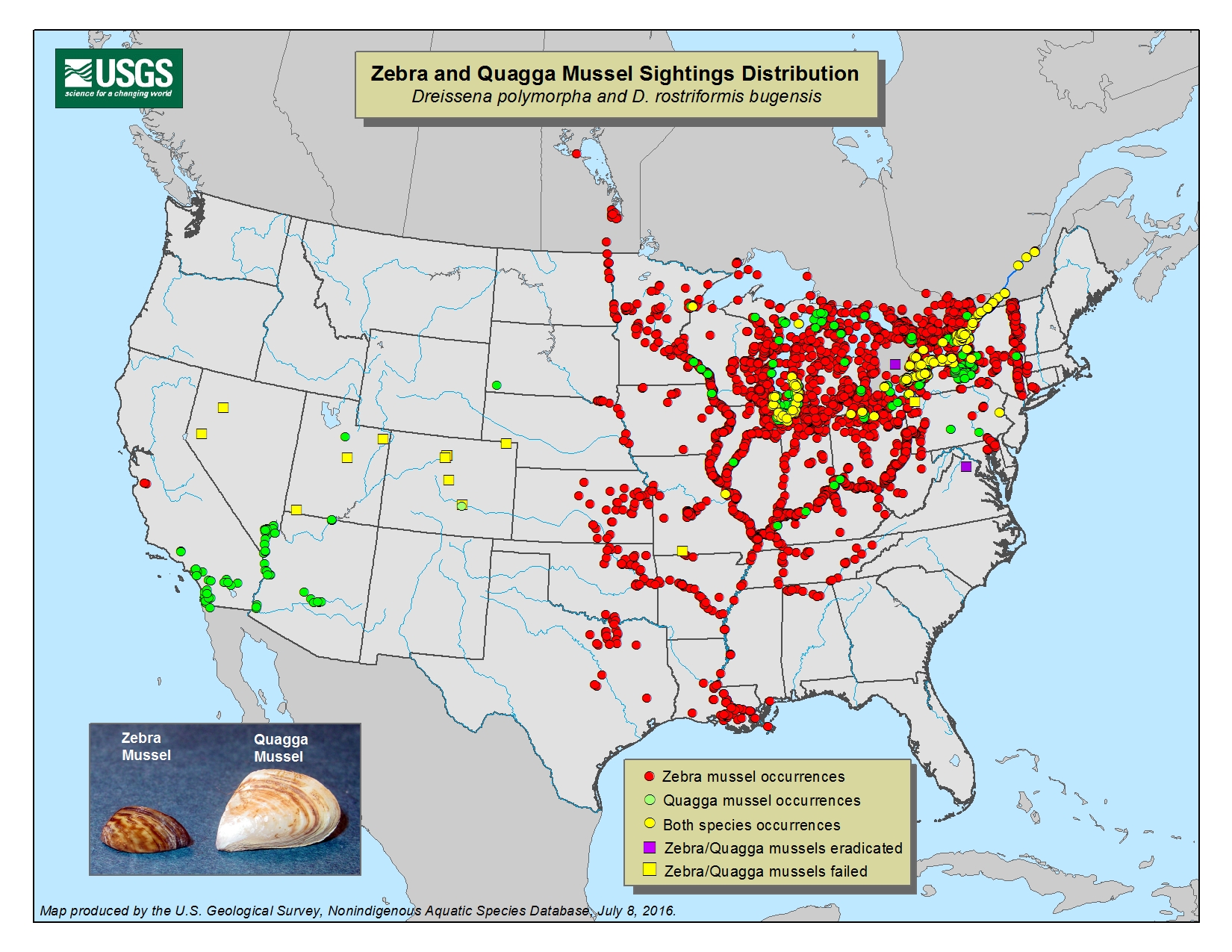 For more information, check out this video from the Vermont Fish and Wildlife Department.