Native to much of the southeastern and midwestern US, but not indigenous to New England, where it has now been confirmed in all states.

Variable-leaved watermilfoil is an extremely well-adapted plant, and can thrive in a variety of environmental conditions. Most often, it is found in relatively shallow bays and coves, but can also inhabit deeper areas and those areas with moderate current. It can grow rooted in water depths up to 20 feet, and potentially deeper under clear water and well-lighted conditions. This plant can colonize various substrates, including organic muck, silt, sand, and gravel. Plants can form terrestrial morphs when stranded out of water, and are able to remain in this land-adapted form until submerged, at which time they revert back into their typical aquatic form.

Variable-leaved watermilfoil is a hardy perennial, and can propogate through root division, fragmentation, turions, and seeds. Often, but not always, colonies produce spikes that emerge from the water and flower in mid to late summer. Some plants may overwinter intact, while others will break apart and die back to their rootstalks. Plants will begin to grow rapidly from sprouts, turions, and seeds in the spring, and will usually outcompete other plants for light and space.

As with most aquatic invasive plants, control of a population once it has become established is difficult and often infeasible. Because of the variety of ways this plant can propogate and spread, eradication of an established population is highly unlikely. As with Eurasian watermilfoil, there are physical, mechanical, and chemical techniques that can be used to manage the impacts of the species, but these are maintenance techniques that do not accomplish long-term eradication.

If found early, a rapid response effort involving the removal of all plants and plant material and subsequent checks to remove any new growth, an infestation may be avoided. 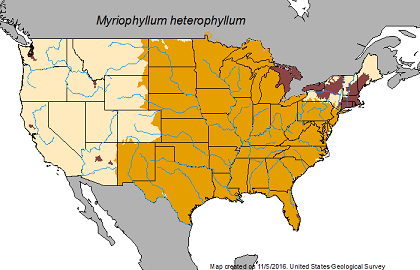 Documented populations of variable-leaved watermilfoil in Vermont. Note: rapid response efforts to the finding of plants in Hall's Lake appear to be successful, as no new plants have been found in recent years. 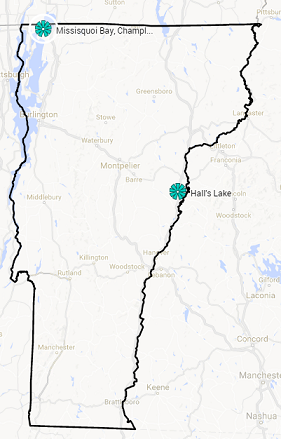