Asian clams have thick, triangular shells with deep and very distinctive growth rings. They are typically small, averaging less than an inch in diameter, with the largest individuals rarely exceeding 2 inches. Shells can be pale brown to greenish brown to a darker brown or almost black in color. The inside of the shell can be pale white to a deep purple.

Asian clams are deeper-bodied (more spherical) and have more symmetrical shells than native bivalves of the Northeast. Native Sphaeriidae (fingernail clams) are similar in appearance, but are flatter and have more asymmetrical shells. Also, the growth rings of an Asian clam are easily discernible and can be felt on an Asian clam, whereas fingernail clams will be smooth to the touch. 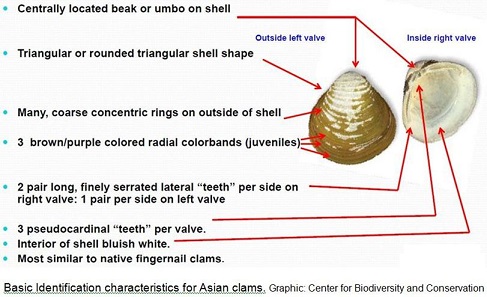 Asian clams are native to temperate and tropical regions throughout much of Asia and Africa, as well as the eastern Mediterranean and parts of Australia.

This species occurs in both lake and riverine systems, where it prefers areas with sand and gravel substrates. Although they are a hardy and adaptable animal, they are rarely found on hard surfaces or in excessively silty areas. They are also extremely sensitive to low oxygen conditions, which may limit their spread and survival in deep areas of lakes or in rivers or streams that are not well oxygenated. Asian clams can tolerate a wide range of temperatures, but require water temperatures of roughly 60 degrees F or higher for reproduction.

Typical of many aquatic invasive species, Asian clams are prolific and are capable of rapid growth and spread. They are hermaphroditic and therefore capable of self-fertilization, so a single individual can release hundreds of microscopic larvae per day under favorable environmental conditions. Adults can also release sperm into the water for sexual reproduction. Larvae are free-floating for a period of time, during which they can travel considerable distances in water currents, and then settle to the substrate.

Asian clams use a siphon-like feeding tube to filter feed on particles in the water column, and can also use its fleshy foot appendage to feed on detritus in the sediment.

Asian clams were documented in Lake Bomoseen, Vermont, in 2016, which is the only known infestation in the state. Elsewhere, they have invaded many waters throughout the U.S.

For more information, check out this video from the Vermont Fish and Wildlife Department.